Before I start my tea culinary experimentation, I think it’s high time I share with you the identity of two very important ladies, without whose support and contribution my dishes, cakes and desserts would not taste anywhere near as nice.

Their names are Aretha and Martina. Aretha’s the fusspot, with a certain queenly arrogance, and a fussy and demanding way with food. Martina’s the gentle one. She’s easy to please, and quite shy with me, whereas Aretha’s not at all afraid to come near whenever I approach.

Aretha and Martina are my Miss Pepperpot hens, and together they supply me with the freshest, most wonderful eggs, practically every day. 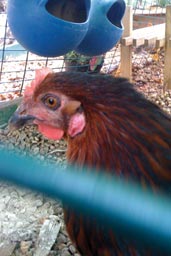 Aretha laid her first egg a month after Martina in late November 2008, and has always been a little behind in her growth. Martina’s eggs are consistently large while Aretha’s are variable, though still beautiful. Variability in size, of course, makes using the eggs in recipes a little dangerous sometimes, but it’s well worth the risk for the taste, which is greatly superior to mass-produced supermarket eggs.

Aretha and Martina aren’t fond of the layer pellets and mash which are supposed to be their staple food. So instead, every morning before 7, I give them a big bowl of fresh, finely chopped vegetables – their favourites are beansprouts, brussels, broccoli and spinach – combined with leftover cooked soya beans, rice, pasta or wholemeal toast with marmite. In the late morning, they have mixed corn and barley, which they love (and it makes the yolks of their eggs even more yellow!) In the afternoon they get quartered grapes and dried mealworms as a treat. Every few days they also get a mixture of grit with oyster shells, a few crushed eggshells (for the calcium), mineral supplements for their water and for their food, a dash of garlic powder and some special bran called ‘bokashi’. I’m afraid to say they’re really quite pampered! 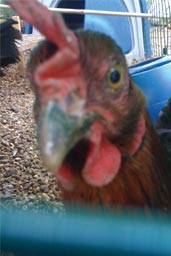 At least now I’ve re-learned how to get up at the crack of dawn, which I haven’t done since army days!

I needed egg whites this week to make special macaroons to use for decorating two different cakes which I will be making and blogging about.

I recall Chef Pascal at Cordon Bleu telling me that, to make really good macaroons, he prefers slightly ‘matured’ egg whites. In the good old days, he said, when salmonella was virtually unheard of, pâtisserie chefs would keep a bucket of egg whites out in the open, covered with a lid, quietly maturing. It makes the egg whites easier to whisk and the final product much tastier. 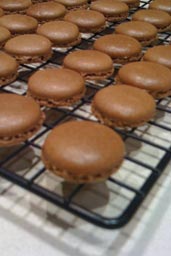 Personally, I don’t keep mine outside but in little containers in my freezer, each one of which holds enough egg white for a batch of macaroons.

I’ve written in an earlier blog about the Slow Movement and the virtues of patience and of taking things at just the right pace. The process of making macaroons is definitely something which can’t be rushed. The egg whites should be a little mature. Then after piping you need to wait for the macaroons’ surface or ‘skin’ to dry before you put them in the oven. Being delicate, you have to wait by the oven for 12-14 minutes for them to be baked just right – with a perfect crust and a chewy centre.

I was visiting my mom last Chinese New Year. She was simmering her special tea-spiced eggs (subject of another blog!) and the smell of Chinese five spice permeated the flat. I was enjoying some chocolate-covered sunflower seeds and milky tea while chit-chatting with her, and the sweet taste of the chocolate mingled with the aroma of the Chinese five spice. That’s when the idea came to me to flavour macaroons with Chinese five spice and chocolate, I noted it down in my little scrapbook, and the memory of this came back to me when I was brainstorming ideas for a cake for Marcus and Nicky’s joint “Big Five-0” birthday party. I wanted to make a yummy chocolate-based cake and needed something extra special to decorate it with.

END_OF_DOCUMENT_TOKEN_TO_BE_REPLACED

a chinese new year snack from the Tang dynasty

END_OF_DOCUMENT_TOKEN_TO_BE_REPLACED

Arashiyama is like a bento box consisting of an assortment of appetizers, a seasonal simmered dish, chef’s selection of raw fish, ric...

END_OF_DOCUMENT_TOKEN_TO_BE_REPLACED

Reminiscences of two childhood treats - Almond syrup and desserts made from mung bean flour.I got a phone call from Mom telling me to k...

END_OF_DOCUMENT_TOKEN_TO_BE_REPLACED

The grand entrance to the Lou Wai Lou restaurant. Dragon Well Green Tea Shrimps are one of Hangzhou’s most famous specialities, so i...