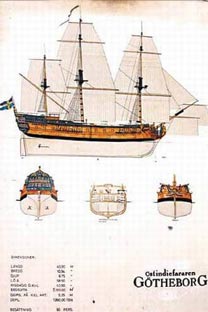 Götheborg – the vessel that capsized in 1745 with 370 tonnes of Chinese teas including Songluo green tea.

On the way back from her third journey to Canton on 12 September 1745, the Swedish East India Company vessel “Götheborg” capsized just 1 mile away from the harbour of the Swedish port of the same name. The ship was commissioned by the Company to purchase luxury goods and was carrying 2,388 parcels of porcelains, 370 tonnes of tea leaves and innumerable items like rattans and silks. Two thirds of her cargo sank straight to the bottom of the sea, but fortunately the rest of the cargo just sufficed to cover the cost of the voyage.

One of the teas that went down with the ship was 松萝 Songluo green tea from Anhui Province (amongst other teas like Dahongpao black tea and Oolong Wuyi Yan tea).

Two hundred and forty years later in 1985, the shipwreck was discovered and archaeologists recovered 2,000 wooden crates (mostly rotten) holding tin containers of tea. Amazingly, and thanks largely to the tins’ seals, the Songluo green tea though oxidised was still very aromatic and perfectly drinkable even after 240 years at the bottom of the sea! 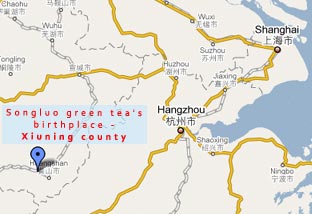 Songluo is a really gorgeous aromatic green tea packed full of umami sweetness. I was invited to Xiuning County where it’s produced on my tour of Anhui province last month. Unfortunately, I’d picked a rainy, muddy day to visit the area, so it would have been impractical to see the tea hills at very close quarters, but I did enjoy the privilege of viewing the locality’s brand new, state owned tea processing plant.

While the plant manager, Ling Yuejing 凌跃进, was showing me around, and kindly letting me take some video shots (which I hope to upload soon on to this site), it was fascinating for me to hear him refer to the traditional Songluo production process, which was historically based in monasteries. 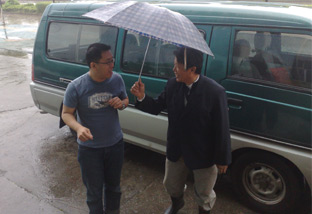 Plant manager Mr. Ling giving me a warm welcome to his factory.

Senior monks would work through the night, hand-rolling and pan-frying the freshly picked tea leaves – using a large wok over a charcoal burner – in order to halt the natural oxidation process that would otherwise turn green tea to black. Meanwhile, younger monks busily fanned the tea leaves to remove any remaining moisture and to cool the leaves, lest they become roasted by the heat which would be just as undesirable as oxidation. 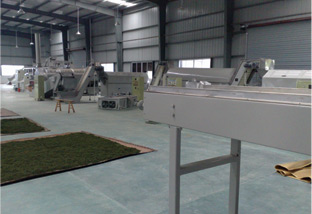 The modern version of these processes involves filtering dry heat from charcoal burners (operating at over 300°C), shaping the leaves through the use of shaking and rolling machines, then tumble-drying the leaves to bring their temperature down to 10°C, and finally, briefly microwaving them to bring any remaining moisture molecules to the surface of the leaves. The whole, basically mechanised process takes between 3 and 4 hours. So it is extraordinarily efficient, though less appealing to the romantic in me. 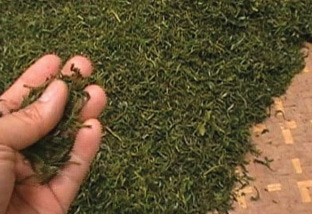 Nearly ready Songluo tea being dried on rattan mats feels a little moist on my hand.

When asked if Songluo tea is steeped in history, Ling relates with enthusiasm that under the Ming emperor Zhu Yuanzhang (known as Hongwu) (1328-1398), there was a 让福 ‘Rangfu’ temple on the summit of Songluo mountain. At the temple’s entrance stood a huge urn filled with mountain rainwater and duck weeds. A pilgrim one day expressed a desire to buy the urn, and the abbot instructed his monks to store the urn away until the pilgrim’s return, first emptying it of the rainwater and weeds that had collected in it.

The pilgrim duly reappeared and was horrified to find the urn ready for his collection, completely clean and empty. It had been the jade-green water that he really wanted rather than the urn itself! 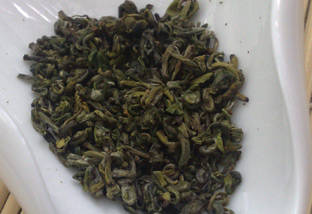 The jade green and golden edges of the fine tender Songluo green.

Legend has it that, subsequently, little tea plants grew and indeed thrived at the spot where the urn’s contents had been poured out. The monks then learned how to process the leaves of the tea plants, and this is how Songluo tea was born. 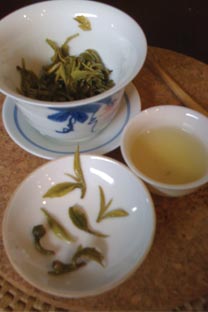 From the outset Songluo was renowned for its medicinal properties. For example, the old abbot discerned in it an ability to cure dysentery and by distributing it among the local villagers he reckoned on saving many lives. Even today, practitioners of Chinese medicine recommend it to relieve bloatedness, phlegm, high cholesterol, indigestion and upset stomachs.

Songluo tea is cultivated on Songluo Mountain at more than 850 metres above sea level. The leaves grow wide and thick while the stems are thin. The dried leaves are fine and curly, which is indicative of their tenderness. They are mostly green in colour with a hint of golden yellow, and they are deeply fragrant. 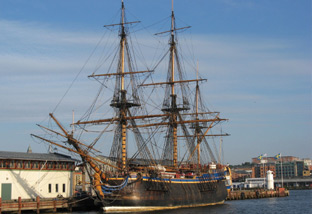 Götheborg – a replica that started sailing in 2003.

It all depends on your personal taste, but I suggest using about 3 grams per 150 ml (preferably soft) water, boiling the water beforehand and letting it cool to about 80°C before brewing. Brewing time is around 30 seconds, adding 10 seconds for each re-brew. In a gaiwan (a lidded cup), the wonderfully sweet umami aroma is abundant and the umami is still present after 3 brews which is indicative of its high mountain terroir. The taste is very pleasant and soothing on the chest with a strong nose of steamed sweet tender corn.

Last year the Songluo tea salvaged from the Götheborg finally returned to Xiuning County. The local people call this ‘the married daughter coming back to visit her parents’, which I thought was a lovely and very appropriate expression. I was told by Ling that, with the return of this ‘daughter’, his people were able to verify that the Songluo tea they’re making now is in the same form and shape as that produced 264 years ago by the monks. What an amazing discovery!

As a rather sweet postscript, a replica of the Götheborg has been constructed and has been sailing regularly between Sweden and the Far East for the past few years, starting with a voyage to Guangzhou in 2003.