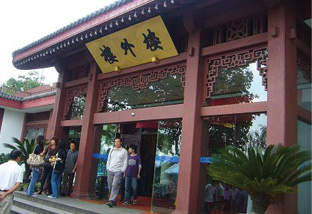 The grand entrance to the Lou Wai Lou restaurant.

Dragon Well Green Tea Shrimps are one of Hangzhou’s most famous specialities, so it’s amazing how hard it is to track the dish down when you’re actually in Hangzhou. However, we did find it eventually at Lou Wai Lou (‘Pavilion Beyond Pavilion’), a 150 year old restaurant on the shores of the beautiful, scenic West Lake.

This dish is a good example of using tea as an ingredient to add subtlety to a dish in a light, refreshing, clear sauce.

There are many colourful stories about the origins of Dragon Well Green Tea Shrimps. Here is one.

The Qing emperor Qianlong (1711-99) liked to travel around his country disguised as a wealthy merchant. One spring day, near Hangzhou’s West Lake, he sought shelter from the rain in the humble little home of a tea farmer. The farmer graciously offered his guest a cup of tea made from the fresh green tea leaves that he had just harvested and pan-fried. 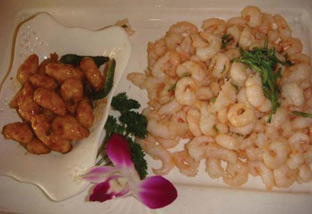 The emperor was delighted by the colour, aroma and taste of the tea. He was desperate to take some of the leaves back to the palace so, being loth to disclose who he really was, he surreptitiously took a handful and stashed them in his sleeve.

The emperor, still in disguise, dined that evening with his entourage at a West Lake hostelry. He wanted to taste again the tea brewed from the farmer’s tea leaves and so he reached into his sleeve for the tea leaves. As he did so, he accidentally revealed to the waiter his golden yellow, imperial garments. These were very distinctive, and no-one could mistake them. 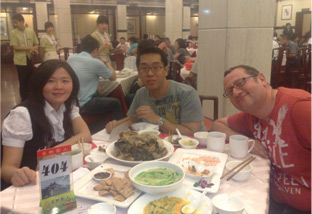 Inside Hangzhou Lou Wai Lou restaurant. We behaved like tourists and ordered all the local speciality dishes.

The waiter went into the kitchen and told the chef the merchant’s true identity, handing him the tea leaves for him to brew. Now it happened that one of the dishes ordered for the emperor’s table was a simple stir fry with shrimps freshly caught from the lake. In his anxiety and haste to keep his illustrious customer perfectly happy, the chef carelessly mistook the tea leaves for spring onions, chopped them up and added them to the stir fry.

The dish is said to have looked very appetising to the emperor, with the shrimps glistening like little jewels among the tender green tea leaves, with their delicate fragrance reminiscent of steamed, young sweetcorn. The emperor enjoyed the dish immensely and conferred on the tea a royal status signified by the use of the word ‘dragon’, and thus Dragon Well green tea and the dish Dragon Well Green Tea Shrimps were born. 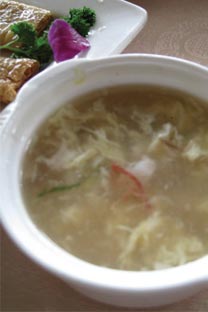 I was slightly disappointed with the Dragon Well Green Tea Shrimps at Lou Wai Lou, and I wonder if the restaurant may not be a little overrated. While the shrimps were indeed glistening and extremely sweet, there was not much fragrance in the dish, certainly not the definitive, steamed, tender sweetcorn-like aroma that I was looking for. Above all, the chef had used poorer quality tea than I had been led to expect. 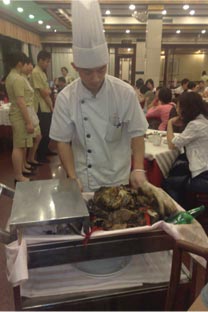 The menu promised the dish would use only the precious ‘mingqian’ Dragon Well green tea. The term ‘mingqian’ refers to tea harvested pre-Qingming. Qingming is the Clear Bright Festival or Tomb Sweeping Day around April 5th, or 104 days after the winter solstice. Mingqian Dragon Well is generally considered the sweetest, tenderest and most fragrant variety, so of course it was rather a blow when I realized that the chef had used a later picking.

Despite this minor letdown, there were other interesting dishes on the menu too, in addition to the shrimps. In fact, we ordered all the famous local Hangzhou specialities: 东坡肉 Dongpo Pork (a soy braised pork dish – attributed to the poet and local hero Su Dongpo), 宋嫂鱼羹 Songsau Yugen (Auntie Song’s fish stew which is packed full of umami and tender pieces of fish, seafood and flakes of poached eggs) and, last but not least, 富贵鸡 Prosperity Chicken.

Prosperity Chicken is whole chicken stuffed with minced beef, mushrooms and chestnuts, then wrapped with lotus leaves and covered in mud before baking. Traditionally it’s baked at high temperature in an underground pit. 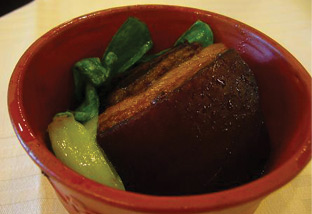 History relates that a certain beggar stole a chicken and then had nowhere to cook it, so he dug a hole in the ground, burned some branches in it, wrapped the chicken in mud and buried it in the hole. Emperor Qianlong was touring Hangzhou, incognito as usual, and stumbled upon the beggar. The beggar saw this tired and hungry man and kindly shared the cooked chicken with him, little guessing that this was the emperor he was feeding. The grateful emperor really liked the dish and asked the beggar for its name. The beggar was embarrassed and quickly said ‘Beggar’s Chicken’, but the emperor conferred on the dish the grander title of ‘Prosperity Chicken’.

Although it was approaching the end of the Dragon Well green tea season, well past Qingming, when I was in Hangzhou, I was fortunate enough to secure a small quantity of the latest ‘mingqian’ Dragon Well green tea. It is extremely fresh, and when I have used it to demonstrate the umami quality of tea in my ‘cooking with tea’ workshop, the participants have been really impressed by it.

I use minqian Dragon Well tea when I make the recipe below but, given the difficulty of getting this top quality tea in the UK, you can substitute it with any decent green tea, such as Japanese sencha or better still gyokuro. The other important thing to note is the use of raw shrimps which, if you’re lucky, you can get from your local fishmonger. Or you may well find them, flash frozen, in Asian supermarkets.

So, here is my own attempt at recreating Dragon Well Green Tea Shrimps: 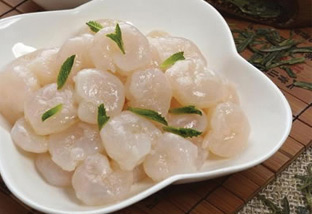