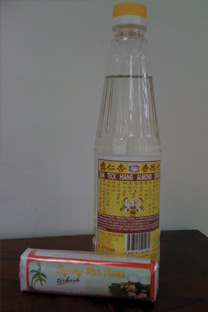 I got a phone call from Mom telling me to keep healthy in the current swine flu pandemic. She said that one of the things I should do is to brew a green mung bean ‘tea’ and drink it every day with brown sugar. Green mung beans are known to have anti-toxic qualities and are cooling for the body, which is why they are taken widely during summer. Their properties were known as far back as 1518, when they were written about in Li Shizhen’s world famous medical compendium. Personally I’m not sure I really ‘buy’ the flu-preventing properties of green mung bean tea, nevertheless it is quite a nice, cooling drink to have in my fridge.

Sensing a little scepticism on my part, Mom suggested as a little incentive that I make myself this daily ‘tea’ and then add the resulting, cooked mung beans into cold coconut milk together with cooked, cubed sweet potatoes, sweetcorn, palm seed and a little palm sugar syrup. 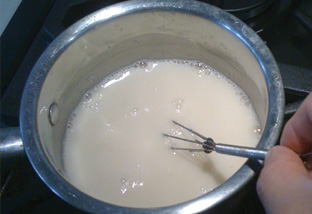 Gently heating the mung bean mixture under a watchful eye making sure that is is not boiled over or burnt.

This makes a marvellous dessert called Bo Bo Cha Cha, which can be eaten cold or hot. As a child, I remember I loved it cold and always thought the hot dessert very adult. Now that I am an adult, I do indeed prefer it hot as the heat brings out the various depths of sweetness in all the ingredients.

Talking about green mung beans and coconut makes me reminisce about a jelly called Hun Kwee made with green mung bean flour and coconut milk. On a hot and humid day back home in Singapore, this sweet, creamy jelly melts in the mouth and sends a sense of coolness through the mouth to the whole body, and there follows the enjoyable creamy aroma of coconut and the lovely, sweet palm sugar. Bliss!

For me, green mung bean powder is a rather intriguing ingredient. It is clearly a form of starch (65%) and protein (26%) so that one can use it to make a fluffy, light, yet flavourful, steamed cup cake. But also it works so well in making jelly you could convince someone you’re using gelatine even though you’re not! I am no chemist, but I would really like to know how this single ingredient can be so flexible. 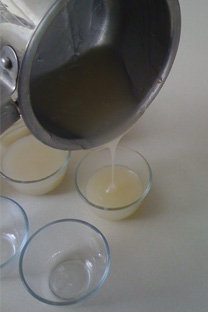 Pouring the thickened mung bean jelly mixture to little ramekins. Chill in fridge for an hour or two.

Instead of mung bean and coconut jelly, I decided to experiment with mung bean jelly with almond syrup in combination with a mousse. I’m hoping to sell this delectable dessert at my market stall in Covent Garden on 20 August and 17 September. Before I go any further, I need to explain another ingredient which my dear friend Nic brought over when he visited me in London last month. It’s Sim Teck Hiang Almond Syrup, a very familiar brand in Singapore and Malaysia, sweet with a heady almond scent. 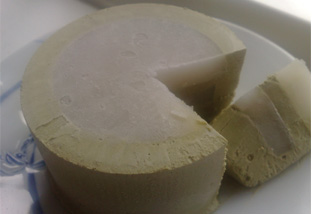 Matcha Mousse with Almond Mung Bean Jelly. If I had some creamed sweetcorn on hand, I would have added another layer to this mousse cake!

Almonds in traditional Chinese medicine are considered neutral, i.e. neither yin nor yang, and are used to dissolve phlegm, lubricate the lungs, reduce breathlessness and panting, increase saliva and quench thirst. We’d sit in open air coffee shops and order this syrup in the form of a hot, sweet drink or drizzled over a bowl of soft beancurd – probably more because it was yummy than for its nutritiousness!

The mung bean jelly tastes very refreshing with its almond aroma. It is a little firm but I think, if I match it with a mousse, it will provide a nice contrast in texture. I made up a batch of matcha mousse with whipping cream, sugar, gelatine and matcha powder. Eager to try out a particular mousse cake design I saw in a Japanese pâtisserie magazine where there is a layer of clear jelly on top of the mousse cake, I thought I would do the same but using mung bean almond jelly and green tea mousse cake.

After a few hours nervously waiting for it to freeze, I unveiled the mousse and I was delighted to have achieved the desired effect! The mousse and jelly are light and the contrast in texture is good. But there’s still something lacking. I suspect a good layering of creamed sweetcorn would be suitable, though it’s more difficult to find this in London than I would have expected. After trawling in vain for it through several branches of Tesco and a Sainsbury’s, I’ve decided to come home and hunt for it on Google and in Chinatown!

These are the recipes in detail:

Boil till beans are soft. If you want to eat the beans too, cook them until very soft. Refrigerate and drink within 2 days.

1. Dissolve all ingredients and stir over low heat until just boiling, so that mixture thickens. Remove from heat. The mixture will thicken very quickly so stay watching!
2. Pour into moulds and allow to cool.
3. Set, preferably in a fridge.

1. Sift dry ingredients (except sugar). Set aside.
2. Beat eggs, sugar till creamy, foamy and light (ribbon stage – test by making a figure of 8).
3. Melt the butter and chill.
4. Warm the water and add the vanilla essence. Set aside.
5. Gradually fold in the sifted flour mixture.
6. Then fold in vanilla essence, water and melted butter. Be careful not to overmix.
7. Pour into little moulds and steam over high heat for 20-30 min. or till done.