Teh Tarik aka “Pulled Tea” 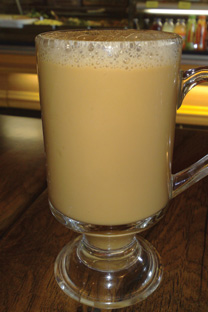 I’m sitting in Makan on Portobello Road as I write these words, sipping contemplatively at my glass of teh tarik, and feeling I could almost be back at my late grandfather’s coffee shop in Pontain Kechil (Johore Bahru, Malaysia), whiling away a dreamy, hot afternoon under the rickety old ceiling fan.

The best part for me about living in Notting Hill is that my house is 5 minutes walk from this friendly, authentic, bustling Malaysian café. They serve lots of food and drink that I grew up with. Though I’m Singaporean much of my family lives over the border in Malaysia and so weekly visits there were a big feature of my childhood.

Teh tarik is a Singaporean and Malaysian icon. It means ‘pulled tea’ in the Malay language. It’s a bit like good old Indian chai, a really strong, sweet, milky tea made in an unusual way – it’s quite a theatrical performance, like the fancy juggling of cocktail bartenders. The server holds two metal containers or vessels. He pours the hot milky tea from one container, held up high, above his head level, in a long stream down into the other, empty container, held at waist level. Then he reverses the two containers, and repeats successive times. It’s the action of ‘pulling apart’ the two containers that gives teh tarik its name. 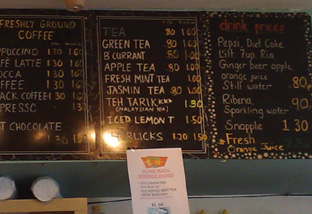 The drinks menu at Makan Cafe; Teh Tarik is £1.30 per cup. You will need to watch carefully when they make the Teh Tarik for you as they are a bit shy and only perform the “tea ceremony” with their backs facing you.

The point of the action is to cool the tea down, thus avoiding unseemly slurping which results from trying to drink very hot tea! This isn’t an issue, of course, with Chinese or Japanese tea, which is usually sipped from small cups.

The ‘pulling’, I’m told, actually changes the protein degradation of the milk, in other words there’s a scientific basis for saying teh tarik tastes different from simple black tea with milk stirred in.

A pleasant side effect of the acrobatic pouring technique is to introduce air bubbles which create a distinctive, capuccino-like froth. The froth gives teh tarik a light texture and brings out more flavour. Yet it’s more substantial than the aerated foam you get from cappuccino makers.

There’s also the entertainment value of watching the tea being made. It’s considered such a visual treat, there are actually public competitions and performances for expert teh tarik brewers in Malaysia!

Teh tarik is such a symbol of Malaysia, when the country sent its first two astronauts into space a couple of years ago, there were news reports that physics experiments would be conducted during the mission to ‘see what happens to teh tarik in space’. The nation’s Minister of Science, Technology and Innovation had to go on television to announce very seriously, ‘There will be no teh tarik-making or roti canai-tossing experiments in space for our astronauts when they blast off’.

By the way, teh tarik is a great accompaniment to roti canai, a type of unleavened pan-fried crispy bread (aka roti prata), nasi briyani (rice cooked in turmeric and served with chicken) and all sorts of south east Asian sweets and pastry (like goreng pisang – banana fritters). Teh tarik is most often served in mamak stalls, a type of hawker centre or night market stall, owned by members of the Indian Muslim community. You’ll also find teh tarik in Indian sarabat stalls in Malaysia and sometimes Singapore, these being places which sell only drinks and not food.

Teh tarik has a rich, slightly reddish colour and a hint of rose flavour. It’s usually served extremely strong and sweet. The acerbic nature of the really strong tea and the really sweet and creamy evaporated milk seem to bring out the best of both tastes. If you’re concerned about the sugar content, a Malaysian celebrity chef Nicholas E Pillai suggested making it with soy milk, but I think it is an atrocious idea!

In Malaysia you can ask for teh tarik kurang manis (‘pulled tea with less sugar’) but usually that just means your drink gets diluted. If you want plain hot tea, order teh O kosong (O for Hokkien for ‘black’, and kosong is Malay for ‘empty’). To get hot tea with sugar but no milk, you need to ask for teh O. To get unsweetened hot tea with evaporated milk, ask for teh see. For sweetened iced tea, say teh O ais. And iced lemon tea (with lime actually) is teh O ais limau.

I discovered on my last visit to Singapore a version of teh tarik – new to me – with ginger. This is called teh halia and it has a nice, warm, gingery taste that rolls down your throat. Apparently some customers buy a type of teh tarik with ginseng added, while yet others ask for the addition of tongkat ali, a root with viagra-like properties!

Another variation is where the tea-maker doesn’t stir the tea, so that a layer of condensed milk stays separate at the bottom of the glass, a layer of evaporated milk above it, and the tea itself on top. All for a pleasing visual effect.

The following is an excellent recipe for teh tarik.

1. Put up to 4 tbsp of any powdered black tea (I would suggest Yorkshire Tea) into a large glass or cup, preferably with handles.
2. Add freshly boiled water and leave the tea to brew for up to 3-4 minutes.
3. Sieve and transfer the tea into another glass, and empty the tea dregs out of the first glass.
4. Add 2 tbsp sugar and 4 tbsp evaporated or condensed milk or a mix of the two – both are creamy but condensed milk is more sugary sweet. Stir well.
5. Start pouring the tea from one glass to the other, ensuring that you pull it from as high as you can. Have a mop ready and please don’t scald yourself!
6. Stop when you have achieved the desired foamy texture.

END_OF_DOCUMENT_TOKEN_TO_BE_REPLACED

4 thoughts on “Teh Tarik aka “Pulled Tea””