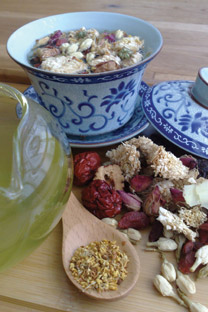 Each of my annual Chinese New Year pilgrimages to Singapore brings me something new or evokes an old memory. What most struck me this time, was the prevalence of Babao Cha “Eight Treasures Tea”: it’s definitely in fashion back home!

The very auspicious name aside, recipes for this sweet “tea” are as varied as all the teas in China! However, the main ‘culprits’ are goji berries, Chinese black or red dates, ginseng, candied winter melon, dried longan and some dried flowers, typically chrysanthemum. Regional variations can include peanuts, honeysuckle flowers, rose, walnuts, liquorice, rock sugar, almonds, naseberry and luohan fruit etc. In many tea houses in China, customers will nurse a gaiwan (lidded cup) of Babao Cha for the whole day in the company of friends.

Some Babao Cha has no “tea” in it and if tea is used, one typically chooses a lighter tea but I have tasted one made with vintage pu erh tea! I prefer a slightly more astringent green tea for my Babao Cha, as it will enhance sweetness of the fruits.

When I was there in the last 2 weeks, Singapore was suffering from a heatwave with daily temperatures of 34°C and above. The sudden thunderstorm in the late afternoon as it gets too hot doesn’t help as the humidity makes it rather uncomfortable. So my mom brewed lots of different teas every day and Babao Cha was one of them. She knows that I am trying to lose a bit of weight and struggling to cope with the heat after the freezing London weather, so she used more of the dried flowers and fewer of the sweeter ingredients.

Now, Babao Cha dates back to the Qing Dynasty where Empress Dowager Cixi ordered her imperial doctors to create a drink involving natural ingredients to retain her youthfulness and allow her to maintain a level head. Her doctors came up with a tea using ginseng slices, sultanas, dried longans, Chinese dates, goji, luohan fruit, chrysanthemum, rock sugar and jasmine green tea. This drink was presented to Empress Dowager Cixi as one that strengthens the Yin element in one’s body, nourishes the kidneys and invigorates the mind, brightens the eyes and if drank throughout the year, can also ensure longevity and an ever youthful appearance. Empress Dowager Cixi was of course delighted with this tea and promptly named it Royal Babao Cha “Eight Treasure Tea” .

Babao Cha is indeed a wonderful infusion. Each of the ingredients has its own yin-yang attributes and when portioned correctly can indeed adjust the yin-yang imbalance in one’s body. Goji berries help to restore good eyesight and can nourish worn out tissues. Luohan fruit is flavoured for its yin or cooling properties. Chrysanthemum also has a cooling and soothing anti-inflammatory effect. Chinese red dates help to build up strength and vitality. Ginger is a heating (yang) and stimulating food that combats ailments relating to internal and external coldness. Ginseng is known to reinforce vigour and help blood circulation. Dried longan fruit is taken for its warming and heat-inducing properties.

Thus, one can enjoy this wonderful infusion the whole year round by adjusting the ingredients to the seasons and to one’s body constitution.

come in for free tea tasting & tea pâtisserie at our tea open house .

experience serenity through tea & meditation at our medTEAtation gatherings