An exhausted but elated Pei at the top of Big Snow Mountain (Yunnan) by the 2800 year old tea tree – a living fossil!

Big Snow Mountain (Da Xue Shan 大雪山) stands near Mengku in the Shuangjiang area of Yunnan province in southwestern China. Shuangjiang means ‘double rivers’ and refers to the Rivers Lancangjiang and Xiaoheijiang which criss-cross each other down in the valley.

The mountain has long been known as the home of some very old tea plants, but it was only in 1997 that scientists, investigating the effect of that year’s drought on the region’s plant life, climbed the mountain and discovered one of the true wonders of the world: 2,000 acres of the most ancient, wild forest of tea trees, a perfectly preserved, dense concentration of trees averaging 2,500 years of age. Living fossils, witnesses to history, and most probably the very origins of the tea plant itself!

In April I had the thrilling experience of climbing the mountain myself. As you can imagine, the Chinese government, keen to safeguard this oasis of biodiversity, almost never allows people on to the mountain (other than the nature wardens employed to guard it) but, through a private arrangement with our Pu Erh tea supplier I managed to join a small, intrepid group of amateur climbers.

I started at 2,500 metres above sea level, where a temple has been built to honour Shennong the god of agriculture. Like the mountain, the temple, stunning to look at, is rarely open to visitors, and unfortunately it wasn’t on the day I was there.

As I began the 4 hour ascent to the summit, I was soon surrounded by old tea trees, initially around 100-200 years old, and then gradually getting older and older. These are wild trees, growing where seeds have simply fallen to the ground and germinated without any human organization or intervention. 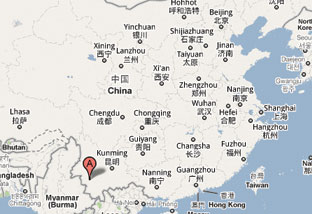 Now, as a city boy from Singapore, this is not my natural habitat! But the experience did recall my army days – sadly, I did not bring my army boots, but was actually extremely poorly equipped, taking with some light casual shoes, a little water and some insect repellent. I also had a trusty walking stick, fashioned by the nature warden who guided me and my little group (he had kindly removed all the thorns, so I wouldn’t hurt myself).

Despite the somewhat alarming information that wild, black bears inhabit the mountain, given that it was broad daylight we were not guided all the way up but mostly made our own way. The pathway, such as it was, was dry and sandy, often very steep and narrow, and full of loose rocks. There wasn’t any signposting, of course, and much of the time there wasn’t really a clear path upward at all. Inevitably, this meant that we got lost for nearly an hour – it was where a dried up, ancient tea tree trunk had fallen across our path – and we tried not to imagine that we would end up like the Korean travellers who apparently got stuck up on the mountain all night long some time last year.

I was crawling on hands and knees quite a bit of the time and, though often tempted to lean my weight on some apparently sturdy, old tea branch or huge boulder, I soon learned that these were not as fixed as they appeared!

It’s hard to describe the elation when we reached the 2,800 year old tree which was our destination. Some kind strangers with us shared their bread, which tasted the best ever!

The nature wardens amused me. Some smoked cigarettes in absolute contravention of the mountain bye laws and, it seems to me, endangering their nation’s most precious heritage – such is the typical Chinese addiction to nicotine – and justified doing so by saying it kept the mosquitoes at bay.

There was also a sweet dog that kept running up and down the mountain helping and cajoling us climbers to keep on with our efforts. And I shall never forget the septuagenarian couple who, though exhausted, were absolutely determined to get to the top – which certainly inspired me, half their age, not to even think of quitting!

This province of Yunnan is where that wonderful, large-leaf, post-fermented tea known as Pu Erh comes from, and we have brought back some Big Snow Mountain tea which will very shortly be available in our tea store (currently available for tasting at our tea open house events). I didn’t pick it myself – I’d have loved to pick some tea leaves up on the mountain but that would have been to defile a truly wondrous place – but it’s the very next best thing, freshly picked and processed tea from the glorious Big Snow Mountain!