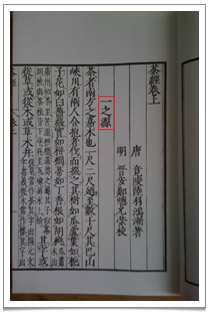 I have been toying with doing a series on the famous Classic of Tea (Cha Jing 茶经) because I want to make the riches of this ancient treatise accessible to my non-Chinese-speaking tea friends, a sort of easy-reference. (To view the Chinese characters in this blog, you may need to enable character encoding of your web browser to either Unicode or Simplied Chinese.)

The format of the monograph, written by tea saint Lu Yu between 760 and 780 AD, is “Three Scrolls Ten Chapters”. “Chapter 1: Origin” describes the mythological origins of tea in China, varietals of the tea plant and its proper planting, as well as some etymological speculation.

Table of Contents
“Cha Jing” The Classic Treatise of Tea by Lu Yu
One: Origin 一之源:- This chapter expounds the mythological origins of tea in China. It also contains a horticultural description of the tea plant and its proper planting as well as some etymological speculation.

The tea plant is a prime flora of Southern China. It can grow from a meter in height to a few tens of meters. In the areas of Bashan (in the east of modern day Sichuan province) and Xiazhou (west of Hubei province) some tea trunks are thick enough for two grown men to hug and the only way to harvest the tea is to cut the branches. Indeed, when the 2800 years old tea tree I visited this year on Big Snow Mountain in Yunan requires more than 3 men to hug! You can try some of this ancient tea here.

The tea plant has leaves like that of gardenia, little white flowers that are rosaceous, fruits like palm, stems like that of the clove plant and a root system similar to the walnut tree. It grows best on eroded rocky ground, second best on loose, sandy soil. Yellow earth is the worst. If the tea plant is not prospering, the cultivation technique for growing plants from the Gua (Chinese character “瓜” or in Latin “Cucumisativus”) family can be employed.

According to Lu Yu the leaves can be harvested after three years. Tea plants grown in the wild produce the best leaves. Tea growing on a sun-facing slope or in a forested area may produce purple leaves, which are considered superior to the green variety. Curly tea buds are better than flattened, straight ones. Tea plants grown in shaded areas or valleys are not suitable for making into tea as they cause bloatedness.

Lu Yu teaches that tea is Yin (cold/chilly) in nature. It cures heatiness, congested chest, thirst, migraine, dry eyes, weak limbs and aching of the joints. Referring to two of ancient China’s top ten beverages, he says good quality tea matches the sweetest layer of fat on top of a refined milk drink or the most wonderful morning dew. However, if the tea is not picked at the right time or been processed unskilfully or contains bit of weeds or rotten leaves, then consuming tea, he says, will lead to illness.

Lu Yu compares tea’s effect on the body to that of ginseng. He lists the qualities of ginseng from various regions to demonstrate that, as long as you can understand the principles behind the use of good ginseng, you will be able to apply them to the use of tea.

Now, ginseng is a highly prized root in the Orient typically taken orally as an adaptogen, aphrodisiac and/or nourishing stimulant and in the treatment of type II diabetes. As with all things precious, there are many fake ginseng floating around the market. Korean ginseng is generally considered the best. The American ginseng are also quite popular. My mom would typically make a fresh brew of ginseng tea with a bit of salt just before any major examinations. So now I always associate the flavour of ginseng tea to high level of examination stress!