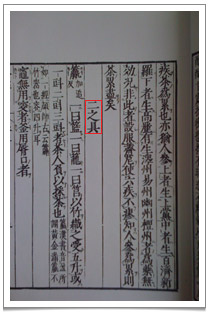 Tea saint Lu Yu’s Classic of Tea Chapter 2 in its original text. (To view the Chinese characters in this blog, you may need to enable character encoding of your web browser to either Unicode or
Simplied Chinese.)

In this Part II of my translation of the second chapter of Lu Yu’s Classic of Tea (Cha Jing 茶经) eight further pieces of essential ancient tea-making equipment are described.

Here we see ancient Chinese people have started to standardize product measurements so that buyers and sellers do not really need to weigh or count the tea cakes.

We also learn about the simple ways in which the tea cakes are dried and kept dry using very primitive materials.

Next, a “qi” (棨) or a small cutter with a wooden handle, used to poke a hole in compressed tea cakes.

The “pu” (扑) or “bian” (鞭) comprised strips of bamboo which acted as a “string” holding several compressed tea cakes through the holes made with the qi.

“Pei” (焙) was essentially an underground fire pit for firing tea leaves. It was 2 chi deep, 2 chi + 5 cun wide and 1 “zhang” (丈) i.e. 333cm long. Surrounding the pit was a low wall 2 chi in height. The whole construction was made from clay.

The next two items are used on the pei. They are skewers called “guan” (贯) and wooden shelves called “peng” (棚). Tea cakes (with a hole in the middle) to be fried and dried were skewered on the 2 chi and 5 cun-long guan which are then placed on the peng shelving over the pei pit. The peng had two shelves 1 chi apart: the tea would start on the lower one and then be moved up for final drying.

However, in the Basu area of Yunnan, where chuan was made from the bark of the mulberry tree, the corresponding meanings were 60kg (1 shang chuan or 120 jin), 40kg and 25kg. So you had to be very careful buying and selling tea in Lu Yu’s time!

Finally, the “yu” (育 meaning ‘cultivating’) was a wooden warming cupboard with bamboo shelving, a little door and paper glued on to its sides. The bottom of the yu held a utensil for a small flame. People who lived south of the River Chang Jiang would store their tea in the yu during rainy seasons to keep their tea dry.

Imagine what a fragrant house it would be if one had a yu constantly drying tea leaves. Wouldn’t that be very calm and meditative!

I had a fun time trying to find descriptive information and pictures of the 16 ancient pieces of tea making equipment in these two blog posts! So now moving on to Chapter 3!