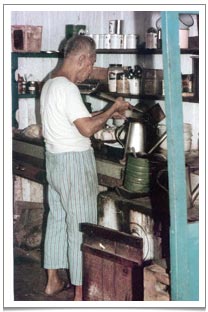 I blogged about the Yuan Yang Coffee Tea beverage recently and about the creamy pulled tea and masala chai. That, and chats with fellow Singaporean Charles (@HotelPRGuy) at Chaya Teahouse about all the nice food and drink we enjoy back home, have made me crave after milky teas.

I grew up with strong black tea, made from a blend of Indian and Malaysian teas, with a big dollop of condensed milk or a couple of tablespoons of evaporated milk. It wasn’t just a soothing drink for me but also a nutritious beverage that would stave off any hunger pangs for an hour or two.

So to indulge in this reminscence, I want to look into the various form of milky teas prevalent in the Far East.

My maternal grandfather used to own a coffee/tea shop called “Qiong Yuan Xiang” (琼源香) in the Malaysian village of Pontain Kerchil (the shop has now relocated and is run by my youngest uncle at a different site) in the state of Johore. I recall with delight the delicious thick milky tea that my Grandpa brewed for his customers.

His tea brewing method, common in many Hainanese coffee/tea shops, was slightly different to what we are used to now. He used a cotton cloth conical sieve (about 30 cm long with a 10 cm opening) and into it put a great big scoop of CTC black tea powder. This was then steeped in a stainless steel pitcher of freshly boiled water for a good 5 minutes. The tea was then re-infused several times to create an additional amount of thick tea called ‘cha dan’ (茶胆 tea ‘gall’), which was kept warm over a wood-fired stove until required. It was diluted about 5 times before the addition of condensed or evaporated milk.

This method of brewing is called ‘gou cha’ (沟茶 ‘channeling’ tea). The hot tea is very smooth, aromatic, creamy and sweet. It has a slightly thicker viscosity – almost like pure cream. The slight acerbic taste of the tea is nicely balanced by the creaminess.

It is however, the aroma of the cream tea that I remember most fondly. Holding a small ceramic cup with thick sides in my small hand, I would often simply stick my nose in and stir the tea with a teaspoon to smell the liquor and listen to the clinking sounds made by spoon on the cup. I also remember that wonderful feeling of calm, warmth and settling in my little stomach. I usually drank this with a Kahwin (‘marriage’ in the Hokkien language) sandwich – a thick slice of white bread, freshly toasted over a smothering charcoal fire, skilfully cut into two and opened up like a book. On one side of this ‘book’, I’d get a thin spread of butter or margarine and, on the other side, a thick glob of kaya coconut egg custard.

The tea powder would be made from a blend of teas created by my Grandpa. Every coffee/tea shop would have their own concoction to capture the hearts of their customers. While the flavours of these concoctions were relatively similar, there were subtle nuances to differentiate them, and many customers would swear by and be staunchly loyal to the particular tea of their favourite coffee/tea shop.

I later learned that in Hong Kong some tea shop owners use a similar method, which they call ‘siwa naicha’ (丝袜奶茶) meaning Silk Stocking Milk Tea. This rather unusual name came about because the white cotton sieves turned into a light brown colour just like a pair silk stockings. Or perhaps the name came about because the milky tea is so silky smooth! There are rumours that some tea shops actually use real silk stockings as filters! But I doubt that it is true as it must be rather cost prohibitive!

For me, a good cup of milky tea doesn’t simply mean higher proportion of milk. One must strike a point where the creamy sweetness of the milk complements and brings out the aromas of caramelised, slightly tannic, black tea. Sometimes, a small pinch of salt can add an amazing backdrop to the sweet cream and caramelised tea.

END_OF_DOCUMENT_TOKEN_TO_BE_REPLACED

Recipe for a non-alcoholic Lychee Black tea “mulled wine” that is perfect for Xmas. Recipe for Lychee Vibes – a cocktail with lychee black tea and vodka. Recipe for Consort Yang’s Deep Fried Lychees – a quick and easy delicious festive dessert. Learn how Consort Yang’s favourite fruit Lychee has inspired the great lychee black tea! Natural sugars in Lychee black tea caramelised during roasting giving it an opulent, mahogany hue & fragrant aroma. From a Chinese traditional medicine perspective, Lychee Black tea can relieve fatigue and is Yang in nature so is very suitable for drinking during autumn and winter as an antidote to the Yin season.

END_OF_DOCUMENT_TOKEN_TO_BE_REPLACED

The most difficult thing about brewing tea

“What temperature should I brew this tea at?” is one of the most frequently asked questions. This blog attempts to explain how the ancients “read” the temperature of water without a thermometer.

END_OF_DOCUMENT_TOKEN_TO_BE_REPLACED

fly me to the moon

Matching tea with the various moon cakes – a delicacy of the much celebrated Mid-Autumn festival. Includes a recipe for traditional moon cakes with red bean paste. And Win a Tea Appreciation Master Class by answering 3 lantern riddles!

END_OF_DOCUMENT_TOKEN_TO_BE_REPLACED

A review of The Tea Cosy Tearoom that enforces a strict English tearoom etiquette. Also include a review of The Brighton House B&B and various other fabulous shops discovered over a 3-day in Brighton.