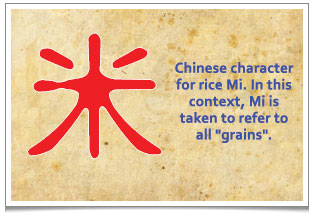 The second essential item for living is Rice, or ‘grains’.

Happy New Year everyone! This is the second of seven blog posts based on the Chinese tradition of ‘Open Door Seven Items’ (开门七件事), or what might be called ‘the Householder’s Essentials’.

My first post was about fire, wood and warmth. We move on now to the next level of human needs, i.e. ‘Mi‘ 米 – ‘grains’ (a term that includes seeds, nuts and pulses).

The ‘Mi‘ 米 character is an interesting one. Ancient Chinese first wrote it like this

which resembles a stalk with 6 grains of rice on it. It was later corrupted to look like the modern day version i.e. two superimposed crosses, or 8 arrows shooting off in different directions from the same core point. It’s an energetic, forward propelling image.

Fittingly, it’s a component of the term for ‘core energy’ – ‘Jing Qi‘ 精氣 – which suggests the ancients viewed grains as key to our inner core energy. Indeed, this was clearly stated as fact over 2,000 years ago in ‘Huangdi Neijing‘ 黄帝内经, the Yellow Emperor’s Inner Canon. This fundamental ancient medical text describes the five grains (‘wu gu‘ 五谷) with their respective characteristics, namely:

Several of these grains can be used to make traditional, midwinter eight treasures ‘la ba’ (腊八) congee recipes as I described here.

Chinese doctors believe that our dietary needs depend in large part on our individual bodily constitution, which is partly inherited, hence the body type of our ancestors is also relevant. This has all sorts of ramifications. A southerner moving to western parts of China might find the white rice to be slightly too acidic or Yin for their taste; adding a little Yang cumin or cinnamon when steaming the rice makes it easier for the stomach to digest. Whilst wheat has slightly Yang attributes, it also has ‘explosive’ traits that make it unsuitable for someone with an inflamed liver; a better grain would be buckwheat, which is slightly Yin. So it’s a mixture of your own body type and your antecedents or origins that we look at. 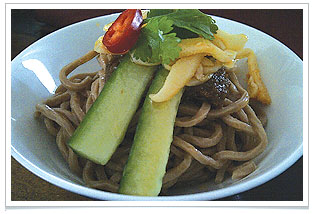 Traditional Chinese Medicine (TCM) differentiates between ‘dead’ and ‘live’ doughs. The former are made by the simple addition of water to wheat flour. They are relatively harder to digest. To overcome this problem, humans make use of micro-organisms (like yeast) to ferment dough a little before baking, steaming or cooking it. The other method is to add some form of fermented paste or sauce. Hence, when we make Oolong tea noodles at Chaya Teahouse, we serve them with our own Hunan-style sauce which is a mix of various fermented ingredients that help digestion.

Modern day diets unfortunately tend to deviate from the wisdom of TCM. Grains are now treated as a side dish (if not completely eliminated) and meat has become the main focus. Even Chinese restaurants now encourage people to have cold appetisers, followed by a main (meat) course and then a dessert – a fine formula for a banquet but far from ideal for daily nutrition.

I am not entirely dismissing low-carb diets, however. In ancient times, people laboured hard from sunrise to sunset, eating mainly rice with only a few vegetables or tofu: obesity wasn’t a problem back then! Then again, not all sugars are the same!

The ultimate motivation of any organism is to sacrifice itself for the next generation by storing the most essential nutrients in its seeds. If you look at many plants, despite having diseased leaves or roots, their seeds will still be perfect. TCM conjectures that sugar found in seeds and other grains is particularly rich in Qi (氣) energy.

TCM views diabetes as resulting from the inability of the inner core energy to digest or get rid of foreign substances without additional insulin. It believes the underlying cause is inadequate consumption of grains (including seeds, nuts and pulses) and excessive consumption of what should properly be side dishes i.e. all the non-grains. This includes foods like meat and fish, the things the rich can afford – indeed, diabetes is sometimes called ‘fu gui bing‘ (富贵病) – ‘illness of the rich’!

The Cantonese language, interestingly, has a character ‘song‘ (餸) to refer to all the non-grains, and it is composed of two characters meaning ‘deliver’ (送) and ‘food’ (食). Non-grains are just there to ‘deliver’ or facilitate the ‘proper food’, which is the grains!

The two Chinese characters that together mean hunger/starvation are ‘ji er‘ (饥饿) but most people do not understand the difference between these two. ‘Ji‘ (饥) refers to the need to fill up the stomach and intestines when empty. ‘Er‘ (饿) is the sense of craving that results from ingesting the wrong type of food, an insufficiency of the proper nutrients the body demands. Thanks to ‘Er‘, some people are always hungry even though they have eaten a lot of food.

A simple bowl of steamed rice is very aromatic. Accompanied by a little side dish of vegetables, fermented bean curd or natto, it’s enough to make me feel full and satisfied. I always feel much better (neither ‘ji‘ 饥 nor ‘er‘ 饿) when eating this way. TCM encourages people to understand and listen to their body and understand the difference between needs and wants, to eat seasonally and not to excess.

END_OF_DOCUMENT_TOKEN_TO_BE_REPLACED

The festival of La Ba where a sweet congee is prepared to usher in the Chinese new year. The Koreans also has a similar dish made with 8 ingredients eaten around 3 weeks to the new year. Includes recipes for a sweet and savoury La Ba congee. The La Ba congee can nourish the spleen, enhance qi energy, clear the lungs and eyes and has calming, restorative effects.

END_OF_DOCUMENT_TOKEN_TO_BE_REPLACED

It may sound counter intuitive but on a hot summer’s day, the best way to cool down is to drink hot tea. The hot tea stimulates our blood capillaries to expand slightly and making you feel cooler. As you sip your tea and allow yourself to calm down and achieve a certain degree of stillness of your mind, your body will naturally feel cooler.

END_OF_DOCUMENT_TOKEN_TO_BE_REPLACED

4 thoughts on “the 7 essentials of life: rice”