As with wine, tea terminology can get flowery and high-flown, but the last thing we at teanamu want is to promote any kind of tea snobbery.

We just enjoy drinking tea, appreciating its look, its feel, its delectable taste, and knowing it was prepared with kindness and compassion.

Through chaya teahouse, our tea school, online shop, free tastings and myriad other activities, we are spreading and sharing the pleasures of true oriental tea culture.

It was a passion for tea that led us to create teanamu. The word ‘teanamu’ means ‘bamboo’ which is a symbol of longevity, slow pace, strength and grace.

Pei Wang grew up in Singapore, the grandson of immigrants from Hainan island in China. He is a Buddhist, with a heritage of Taoism and Confucianism. 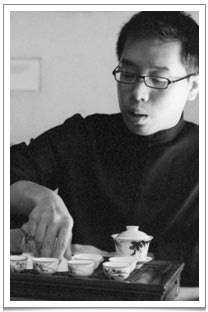 Food played a central role in his family, and at his mother’s knee Pei learned to honour and respect the Five Qualities of aesthetics, taste, quality, savouriness and texture.

In Chinese tradition it is through the medium of food that mothers express their love, philosophers reflect on moral wellbeing and healers cure the sick. This ingrained relationship with food, this deep love of food preparation and consumption, informed Pei’s later exploration of other aspects of his complex civilization – its language, myths, literature, ideas and, not least, its culture of tea.

Captivated by the profusion of wonderful flavours and styles of Chinese tea, he explored the rituals and history of tea culture, developing a profound understanding of the underlying thinking, as it relates to social order and man’s relationship to his senses.

Tea drinking, for him, is both an art form and an evocation of a harmonious connection between people. It has a personal and a social aspect. It is a sensual, an intellectual and a contemplative experience. For Pei, it is a lifelong path.

Pei graduated with an honours accountancy degree from the Nanyang Technological University in Singapore and worked in accountancy and IT. He later trained at the renowned classical French culinary institute Le Cordon Bleu in London and is keen to use tea as an ingredient to enrich traditional French pâtisserie and to promote the innovative art of modern and classical tea cuisine.

While looking up Chinese tea online, I chanced upon the website Teanamu.com with its treasure trove of facts and anecdotes on Chinese tea.

Singaporean Pei Siong Wang, the man behind Teanamu, sells quality Chinese and Japanese tea online, runs tea appreciation classes and does tea cookery lessons out of his home in the charming and affluent Notting Hill neighbourhood of London.

What struck me most about Pei was how his ardour for tea seemed to leap out of his well-articulated and thoughtful blogs on the subject. I spent time reading rave reviews by other foodies about his tea classes. Finally, a bilingual tea aficionado serving as a bridge between the Chinese tea market and the English-speaking world!

Trained as an accountant, Pei’s love affair with tea started about 12 years ago during a quest to unearth his Chinese roots. On one of his visits home, Pei signed up for a tea masterclass workshop at Purple Cane in Kuala Lumpur. Afterwards he went back to the UK and started drinking tea in a ritualistic way.

“I found a few simple leaves could create such a wonderful aroma and a wide range of flavours,” says Pei, 39, during our meeting at Purple Cane Tea Restaurant. Pei was on a day trip to Kuala Lumpur while on a Chinese New Year break in Singapore.

“I realised that the tea ceremony is not just about making tea. There’s a long cultural history behind it, and every single component of the history fascinates me.”

Finally, a bilingual tea
aficionado serving as a
bridge between the Chinese
tea market and the
English-speaking world!

Buoyed by his first masterclass experience, Pei plucked up the courage to do a tea artisan and tea assessor exam in China and trained under different tea masters in China and Malaysia. He also tried different teas and pored over books and articles.

Back in the UK, Pei was invited by the British Museum to do a monthly workshop on Chinese tea appreciation during its six-month Chinese Terracotta Army exhibition in 2008.

“It was nerve-racking because I see myself as a beginner, and I still do, because there’s so much to learn,” admits Pei who was then a computer programmer.

The museum stint gave him the impetus to take the plunge into the tea business. A self-professed food lover and cooking buff, Pei also enrolled in the prestigious Le Cordon Bleu Patisserie School in London.

“A naughty thing that I’m doing is taking classic English or French recipes and adding tea to it,” he adds.

Tea philosophy
In his tea classes, Pei explores the rituals and history of tea culture.

“I always tell my participants that the aim of the class is not to become tea snobs but rather to appreciate tea, know what you’re drinking, and more importantly, to appreciate that someone is brewing tea in a mindful and meditative way. And through the tea, you are giving kindness and compassion to the guests,” explains the soft-spoken tea master who exudes an aura of serenity,

“And if you can extend that to your everyday life – being kind and compassionate to everyone and everything around you, it makes for a better life.”

Pei likens the tea ceremony to a “pause button” we can press.

“You enter the tearoom, enjoy the tea and revel in the moment. You don’t think about the e-mails you need to answer or deadlines, and take a respite from our hurly-burly lives,” he adds. “A tea poet friend of mine uses a phrase that sums it up best: “Giving a cup of tea is like giving a cup of now.”

Pei likens the tea ceremony to
a “pause button” we can press.

Though Pei’s classes are designed to last two hours, the sessions are usually longer, with some stretching to seven hours.

“When people first come in, they’re scared of tea but when they try the different teas and learn more about tea culture, they tend to get calm and sink into a meditative state. It’s hard for me to say: This class is finished, please leave because I need to rest,” he chuckles. “It’s nice to introduce the joy of tea to people. I managed to convert some coffee lovers who hated tea!”

Generally, the Western way of appreciating tea is still about quality and taste, Pei adds.

“Tea drinking is very personal – I might tell you that this tea was made in 1920, it’s really good and you should be able to taste notes of leather, wood and mango,” explains Pei. “But if you can’t taste it and you don’t like it, no matter how expensive it is, it’s useless to you.”

Like wine, tea terminology can get flowery, making it a tad highbrow instead of something that regular Joes can relate to.

“I think cheap tea can fit a purpose. Sometimes if you’re rushing, teabags are good. It’s about spending that extra minute waiting for the kettle to boil and be in the now, rather than worrying about what’s going to happen next.”

The typical tea blogs written in English tend to focus more on reviewing teas and “patting the back of various retailers”. Pei finds that “incredibly boring” and prefers to delve deeper into the various aspects of tea rituals: social, mental, spiritual, physical and emotional. Currently, he’s in the midst of completing the translation of Lu Yu’s The Classic of Tea, into a simplified English version.

One of Japan’s foremost tea masters who perfected the art of Chanoyu (tea ceremony), Sen no Rikyu (1522-1591), once said: “Chanoyu is just a matter of gathering wood, boiling water and drinking tea; nothing else is involved.”

I ask Pei what he thinks of Rikyu’s words.

“I think it comes from the concept of Zen Buddhism. One has to experience tea but stay detached. Through the process, you’ll know roughly how hot the water is, what kind of tea leaves they are, what sort of tea utensils you’re using and when you serve tea to another person – whether he likes this kind of tea or a stronger brew,” says Pei.

“Over time, it’ll come naturally just like riding a bicycle. The tea process is a fantastic way of practising mindfulness,” Pei adds. “One study by a professor in Manchester found that when mental patients go through a chanoyu, they experience calmness and clarity of mind.”

“But for me, the ‘way of tea’ is about taking time out from the everyday hurly-burly, focusing my attention on the slow dance of tea leaves against beautiful, wafer-thin ceramic cups.

“I contemplate the tea’s evolving aroma and realise that what’s important is conviviality, harmonious relationships, relaxation of mind, ease of spirit, nourishment of the soul and maintaining the grace in my heart to share my time with others,” Pei sums up.

We use cookies to ensure that we give you the best experience on our website. If you continue to use this site we will assume that you are happy with it.OkPrivacy policy
Go to Top