‘China Lates’ at The British Museum 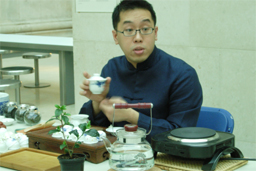 Through sheer luck or fate, a tiny ad I placed in Time Out London led to a massive tea adventure that lasted the best part of a year.

I had been conducting tea appreciation sessions and cooking with tea workshops and my ad was intended as a way to spread the word. I had no way of knowing the ad would be passed to a wonderful person called Cristina at the British Museum by a colleague of hers. Cristina was organizing China Late cultural events to run alongside the huge exhibition called “The First Emperor – China’s Terracotta Army”.

China Lates was an ambitious programme of evening fairs in the Great Court of the British Museum, at which, in addition to my tea offerings, there 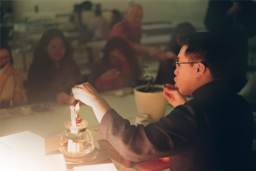 would be displays of martial arts, Chinese opera or dancing, public mahjong and calligraphy lessons, and sampling of Chinese foods and beers, lectures on Chinese art and photography – the whole gamut of cultural experiences.

The very first British Museum tea event I did was at the free exhibition preview held for several hundred Chinese senior citizens from various communities around England. I anticipated perhaps a critical response from all these venerable Chinese elders, imagining as I did that they would be very experienced consumers of high quality Chinese teas. But actually what I found was that they derived real inner happiness from experiencing something very Chinese in a way that they don’t do on a daily basis, and this gave me a great deal of satisfaction. I even managed to cope with speaking three languages at once, the two I’m fluent in (English and Mandarin) as well as the elders’ language of Cantonese, in which I’m far from fluent!

From then on, about once a month, I’d trot along to the British Museum, and, with the assistance of a small army of friendly and enthusiastic Museum volunteers, I’d provide several hundred people with a taster selection of two or three teas, like ‘lychee black’ and ‘iron goddess of mercy’. (Iron goddess of mercy, or tie guan yin, is a very special, semi-oxidised oolong with a lovely bouquet that reminds me of orchids.)

I also set up a ‘tea appreciation table’ for anyone to just drop by to talk tea and drink tea. Potentially having to talk tea to huge crowds was a little daunting. But it was actually an entirely pleasurable experience as the participants joined in readily and we happily chatted about teas. One of them was so amazed by the aroma and taste of ‘lychee black’ that she even asked to bring her used hand-filled tea bag home with her!

It was all very fulfilling. And I would be lying if I said it wasn’t tiring, and six months or so was enough, but I did enjoy the routine of preparation each month, polishing the tea equipment, baking and decorating the tea patisserie (green tea macaroons or other biscuits as well as oolong madeleines) and packing up all the requisite pots and porcelain and paper cups, lugging them halfway across London and carrying them in heavy boxes in through the labyrinthine back corridors and staircases of the Museum.

If it was not for the help of the Museum volunteers, I do not think I would have been able to handle this at all and for that I am eternally grateful. Sadly, I did not get a chance to personally thank all the Museum volunteers so I would like to take this opportunity to say thank you. I also did not get a chance to speak to all those who participated in the tea appreciation taster workshops – either seated or standing. I would be most interested to hear from you.

Above all, my thanks go out to Cristina. I appreciate all that you did so much! Although each one of the China Late session was different, one thing remained consistent – the delighted responses from the public when they tasted the unusual Chinese teas were overwhelming. It gave me great sense of fulfilment that in a small way, I became a matchmaker introducing Chinese teas to the British public.

It was an honour and privilege to have this opportunity. This blog is for remembering and thanking all those who have given me this chance and for sharing their interest in tea with me. So here is my selection of pictures taken over a few China Lates – thanks to Steve Kessel and Naomi Zeitlin.

PS: Here are some of the pictures:

END_OF_DOCUMENT_TOKEN_TO_BE_REPLACED

7 thoughts on “‘China Lates’ at The British Museum”