Qimen Black – a queen of teas 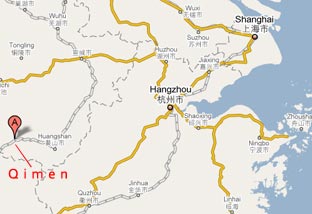 Qimen county where the famous Qimen Black tea (aka “Keemun Black”) is grown.

Catherine of Braganza was the Portuguese princess who played a key role in initiating the British love affair with tea. After being offered by her royal father as a prospective wife to a number of European monarchs, she was eventually married off at age 23 to the newly restored King Charles II of England. There was an international treaty to agree the marriage in 1661, followed by a ‘marriage by proxy’ in Lisbon in April 1662 and two weddings ‘in person’ in England the following month, a secret Catholic one and a public Anglican one.

Her dowry included 221 lb. of tea, huge quantities of valuable porcelain and – oh yes! – the port towns of Mumbai and Tangier! 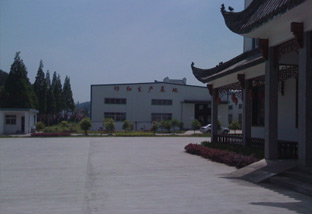 The court of the Merry Monarch was renowned for feasts and banquets at which there would be a great deal of toasting and everyone would become roaring drunk. Catherine drank from her own special goblet and, it was widely noted, remained remarkably sober. In fact, she displayed a healthy, glowing countenance. Some people began to wonder if there was an association between Catherine’s beaming, rejuvenated appearance and the mysterious amber-coloured drink in her goblet. Queen Maria Theresa of France actually caused an international incident when she sent a trusted spy to search for Catherine’s secret in her private quarters. The spy was discovered and executed, poor man! 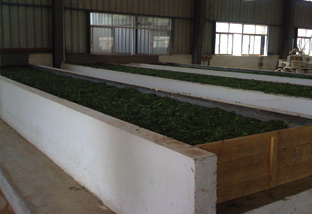 Of course, it was the tea she had brought over from Portugal that Catherine was drinking and it didn’t take long for the English courtiers and upper class to copy their new queen. They quickly appreciated the deliciousness and sophistication of the new drink, destined to be England’s and Britain’s national beverage. 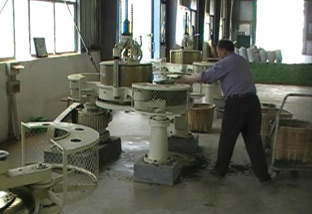 In a sense, the European traders made the best of a bad job by successfully persuading their customers that this was how tea was supposed to look and taste. Thus black tea was becoming by the time of Catherine of Braganza and Maria Theresa a luxury item throughout the Continent, more highly prized than gold some say. And in China, accordingly, tea farmers began to explore ways of advancing and controlling the oxidation process at source, so that they could supply tea of the colour and quality that the Europeans expected. See the story of the “Götheborg” for an example of tea being a core component of the luxury shipping trade. 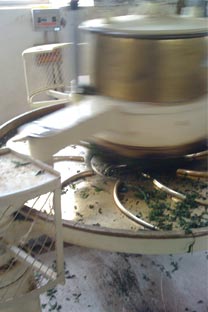 Tea leaves being rolled in machine. The leaves are crushed to kick start the oxidation process.

The best black tea came and still today comes from Anhui or Fujian provinces and above all from Qimen county in southwest Anhui province. On my tea ‘pilgrimage’ to China in April/May of this year I visited Qimen (also known as Keemun), where there are four tea factories, all state owned. Tea production is much more highly state-controlled than elsewhere in China and I noticed that the plantations were guarded by the military and the manager of the factory I visited even seemed a little bit paranoid. I did not feel particularly welcomed. 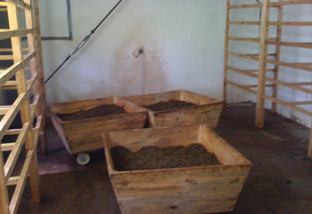 Holding room for fermenting (more correctly known as oxidising). Sadly the actual ‘fermentation’ facilities are out of bounds.

Clearly, Qimen Black has a special place in the market. It actually has intellectual-property legal protection, unlike other tea varieties. Along with Darjeeling and Ceylon it is one of the top three, most famous and prestigious black teas on the international tea market (where it is known as ‘Qimen Fragrance’). Also, it is the only Chinese tea that is so tasty and fragrant that you can add milk to it without ruining it!

Each of the four state-owned factories in Qimen county has its own formulae and production methods. I witnessed a production line with over 40 stages, though I was not allowed to observe all of these stages and my scope for taking photographs was extremely limited. I wondered if there was a concern that I might expose something untoward about the treatment of the workers, although there was no reason for such concern so far as I could see. 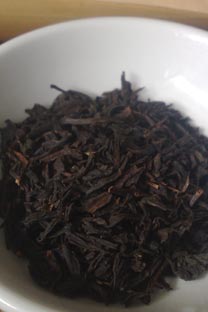 Qimen Black tea claims to be the most difficult to produce. It undergoes a complicated oxidation process that converts the polyphenols with the aid of enyzmes, both naturally occuring in fresh tea leaves, into theoflavin and thearubigins which give tea its yellow and red tint respectively. The flavour profiles and nutrients are carefully monitored and controlled. Heat is used to halt the oxidation process, and this also caramelises some of the sugars in the tea leaves, thus enhancing the tea’s natural sweetness. 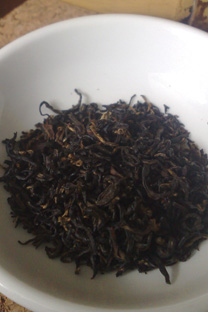 The exquisite Royal Qimen Black tea that is made for Queen Elizabeth II.

The oxidation process starts with the tea being placed on mats on the ground in order that they wilt, and then they are left in a trough to wilt further, before being put into rolling machines to break up the cells of the leaves and release the natural juices. This rolling process triggers the oxidation of the polyphenols and also forms the distinctive shape of the tea leaves. The rolled leaves are next transferred to the ‘fermentation’ room (the word ‘fermentation’ is used loosely to mean oxidation) for up to 4 days, and after that the tea is air-dried. At one time the heat for this was generated by burning charcoal, which gave the tea a ‘nose’ reminiscent of cigars, but with modern mechanised processes this is avoided.

We bought two grades of Qimen Black tea from the factory. Though both are certified organic to E.U. standard, they are at opposite ends of the price spectrum, one costing 50 times more than the other. The expensive variety is allegedly made to the exact specification of Queen Elizabeth II, who is said to order a large batch from the factory each year. Whether this is the case or not, I actually found the price differential to be pretty well justified when I tried both Qimen teas out.

The difference between the two was apparent the moment I opened their foil packs. The ‘royal’ Qimen tea leaves are uniform in size, with some darker and some a golden orange hue, a sign of the tenderness of the leaves. The aroma is immediately, intoxicatingly sweet, with the fragrance of longan fruits and a slight hint of caramel. 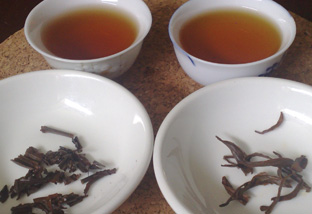 The cheaper tea consists of dark, uneven leaves and stalks. Here, too, there is a slight hint of longan sweetness but you really have to stick your nose into the leaves to get that aroma. When brewed, the tea has very little ‘body’ and texture though the sweet longan aroma and taste are a little more pronouced as compared to the dry leaves. The aroma and, even more, the taste have faded by the second brew, and have disappeared by the third brew.

The ‘royal’ variety wins the taste test hands down, with a sweetness and length that make it very satisfying to drink, and no tannic notes. The liquor is thick textured, clear and reflects light to a high degree, which is indicative of excellent processing. I observed a slight sprinkling of microscopic ‘hairs’ floating on the surface, which show the tea leaves to be very tender. Even by the sixth brew the tea, though lacking in ‘body’, retained its sweet aroma recalling longans and steamed corn.

There is a phenomenon called the ‘golden ring’, and the ‘royal’ Qimen passed this test too. The ring is created on the inside of the cup by the beautiful amber liquor where the levels and balance of theoflavin and thearubigins produce exactly the right refractive properties.

This Qimen Black deserves its royal status. Thanks be to Catherine of Braganza for helping to spread its popularity to these islands, so far from the plantations of Qimen county!